Parenting Black Children in The Age of Trayvon Martin 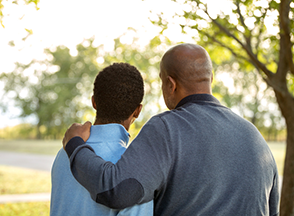 Violence against African Americans, and black males in particular, comes from not only society itself, but also from the institutions that are supposed to protect citizens. Names such as Michael Brown, Tamir Rice, Eric Garner, Christian Taylor, and Freddy Gray remind us of this fact. When their deaths enter the home through national news and dinner conversation, how do African American parents explain these circumstances to their children? More importantly, how should they teach their children to react if they ever find themselves in similar circumstances?  In a recent study, researchers looked at black parents’ response to the death of Trayvon Martin. Though a police officer was not responsible for Martin’s death, participating parents believed his homicide—like the deaths of the men listed above—was racially motivated.

What is racial socialization?

Racial socialization is thought to protect against the psychological impact of racism. Research shows that when youth of color are racially socialized, they have higher self-esteem, better academic performance, stronger anger-management skills, and lower levels of depression and anxiety.  But how does a specific incident like Martin’s death affect these practices?

When asked what Trayvon Martin’s shooting meant to them, parents in this study expressed concerns about the safety of black youth. The parents worried about their children experiencing racism. More specifically, they worried that someone would “pick an argument” with their child or do something to cause a response that might be used to justify violence against their child. Other parents worried about the judicial system working against African Americans.

Gender was also a factor; 86% of the parents said they were more worried about boys and young men than about girls and young women. They were concerned that black male youth were more likely to be stereotyped as thugs, gangsters, or criminals. They even worried that their child would be judged by his clothing.

When parents were asked how they explained the shooting of Martin to their children, 30% used it as a means of passing on “behavioral guidelines” that they felt offered survival skills. For example, parents advised their children to keep their hands where others could see them, or not to wear their hoodies inside a store or in dark places. Others discussed how to safely interact with authority figures, or how to disengage when confronted by a white person. Some parents discussed the importance of walking with other youth and constantly being mindful of their surroundings.

What parents want their children to do

Parents were also asked how they would want their child to respond if he or she were facing a similar situation to Trayvon Martin. A majority of the parents wanted their children to seek help by going to a public place, calling 911 or parents/other caring adults, or screaming for help. Many parents wanted their child to escape the situation by walking or running away. (Some suggested highly specific strategies, such as running home or running in a zigzag so as to be harder to shoot.) Other parents mentioned the importance of being respectful to authority and felt that being “polite and articulate” could save their child’s life. Only 10% suggested self-defense or aggression as an option.

This research reinforces the importance of racial socialization, but also points to the need for professionals to help families who must plan possible responses to both indirectly and explicitly racist scenarios. It’s also important to understand the differences in how to respond to racism from a community member vs. a police officer. Parents also need to think about how boys will be seen differently than girls.

Though no parent wants to think about his or her child getting shot on the way home from a convenience store, this possibility is one African American parents will be forced to consider until racial justice is achieved. Through honest communication and planning, youth of color may be better prepared to cope with this reality.