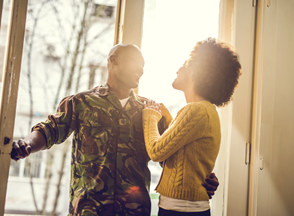 If you or your spouse is a member of the military, you know that sometimes the separations are long and the stress levels are high. At times, you may even have worried: can our marriage survive this? Perhaps you’ve heard rumors that military marriages have shockingly high divorce rates, or that “only the strongest survive.”

What’s the real truth of the matter? Are military marriages on a collision course with divorce court? In fact, over the years, many researchers and experts have tried to find out how marriages within the military fare when compared to civilian marriages. Do couples break up more often?

What We Know—And Don’t Know

As it turns out, it’s really hard to compare the military divorce rate to the civilian divorce rate. For one thing, they are tracked differently, by different agencies (and in some states, civilian divorces actually aren’t tracked at all). For another, if we just put one divorce rate next to the other, we’re comparing “apples to oranges.” To really make things accurate, we would need to compare people who are similar in other ways, too—age, level of education, race, background, and so on. But such comparisons are quite hard to do.

But from what we do know, it seems that on the whole, military couples are probably not more likely to divorce than civilian couples. They may actually even be less likely to split up. (However, some studies suggest that there is an increase in divorce after the military spouse leaves the military. Rates also vary somewhat depending on branch of the military, age, and officer vs. not.) What’s more, being in the military actually encourages marriage.

This may come as a surprise to some. But remember, as employers go, the military is pretty decent, providing a steady income and good benefits. Many civilians, especially those with little education, aren’t so lucky when it comes to their job situation. The military also does provide quite a bit of support to families and couples, something many in civilian life don’t have access to.  And, here’s a question to ponder: could it even be true that men and women who join up tend to value family and/or the bonds of marriage more deeply than general society?

But there are some troubling numbers, too. Although overall, the stats look pretty good, certain subgroups among our military are not doing quite as well.

Marriages that see longer deployments are also more likely to divorce, probably because the increased time apart eventually just becomes too much of a hardship.

Finally, deployments where members see combat or weapon usage are also known to be associated with increased risk of divorce. This has been an increasing concern with deployments to Iraq and Afghanistan. Some research does show an uptick in divorce among those who served in these conflicts.

Coping with the Stress

Marital problems related to deployment and military service can include, but aren’t limited to:

--Caregiving challenges and adjustments if a servicemember is injured

--The “rollercoaster effect” of the ups and downs related to deployment

So, what can couples do to reduce the strain on their partnerships?

While being part of a military couple definitely has its challenges, these marriages and spouses unquestionably also have their strengths. It may help to know that there is no clear evidence that the divorce rate is higher for these marriages. Together, you and your spouse can unite to face the challenges of remaining close while continuing to serve your country.

Are you in a military marriage? Looking for ways to connect and communicate better with your partner? The SMART Couples project is offering ELEVATE, a fun, FREE, research-backed relationship enhancement class for couples, in 5 Florida counties. Sign up today!

After Deployment: Families and Friendship