What is “Relational Aggression,” and How Can It Harm Your Marriage? 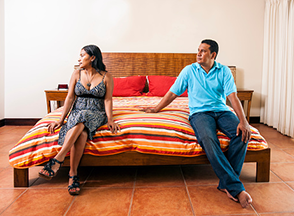 In every intimate relationship, there’s bound to be some conflict. Maybe the two of you don’t agree about how to spend money, or have different standards for keeping the house clean. Maybe one of you feels frustrated about how the other is spending their free time. There are, really, so many possibilities!

But when conflict occurs in your relationship, how do you handle it? Do you figure you’re doing okay because, after all, no one is screaming, calling names, or otherwise out of control? That’s a great start--but there’s more to handling conflict than this. In fact, even if no one ever raises their voice in your home, the two of you could still be engaging in what’s called “relational aggression” …and it might be hurting your relationship.

What is Relational Aggression?

The concept of relational aggression started getting a lot of attention when researchers began looking at how young children, especially girls, behave aggressively towards each other in indirect ways. If you’ve ever been excluded, given the silent treatment, or had rumors spread about you, you’ve been the target of relational aggression. Though no one yells or physically lashes out, the pain can be very real.

But how does relational aggression happen in marriages? When an angry or frustrated spouse intentionally ignores the other partner, or withholds affection or sex on purpose to punish them, that is love withdrawal, one form of relational aggression. And when angry spouses turn to those outside the marriage to “talk trash” about their partners or to spread rumors or personal information about them, that’s social sabotage, another form.

How Does It Affect Us?

Recently, researchers decided to look at relational aggression among a group of about 330 married, heterosexual couples in long-term partnerships. Each person was asked whether and how often their partner used these types of aggression against them. Researchers also looked at relationship quality, asking the men and women how happy and satisfied they were with their partners.

You might be surprised to read that according to this study, love withdrawal is very common. Participants said that 96% of wives and 88% of husbands did this at least sometimes. Social sabotage was less universal, but still frequent. About half of husbands and nearly two-thirds of wives were reported to do this at least sometimes. (It’s worth noting the gender differences here. In both categories, women were more likely to behave this way than men.)

If these behaviors are so common, are they harmful? Yes. Marriages with more relational aggression were less stable, and men and women in them were less satisfied and happy. Behaving this way sometimes might not be a big deal, but as it becomes more common, marriages can suffer.

So why do husbands and wives act like this? It may come from feeling frustrated but wanting to avoid conflict. Giving your spouse the cold shoulder or venting about him or her to a friend or a relative might seem less “risky” than openly disagreeing.  Women, especially, might do this because they have been taught from childhood not to be aggressive or overly assertive.

But as we see here, acting like this isn’t a great choice. Of course disagreements, hurt feelings, and differences of opinion are going to happen between people who love each other. But this is okay! With time and patience, partners can learn how to fight fair, communicate openly and handle conflict in a healthy and appropriate way that keeps their relationship strong. No “silent treatment” necessary.

Need Help with Your Relationship?

If you’re in a relationship but need help with communicating or handling conflict, why not consider taking a relationship education class? The SMART Couples project is offering ELEVATE, a FREE, research-backed relationship enhancement class for couples, in 5 Florida counties. Sign up today!