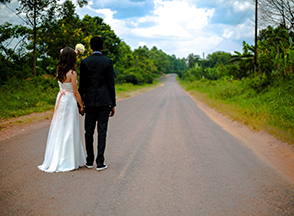 If you’re planning a wedding, you may feel pretty overwhelmed by the details, logistics, and most of all, the expense. The average U.S. wedding now clocks in at $27,000, a huge cost for one day!  When spending so much time and money on an event, it can be easy to get caught up in wanting everything to be “just right,” down to the seating arrangements, flower girl dresses, and hors d’ouevres. But with so much focus on the wedding day itself, are brides and grooms losing sight of what comes afterwards? And if so, what does this mean for how they feel about themselves and each other once the confetti and cake plates are cleared away?

A recent small study looked into the idea of “blue brides” to learn more about this question. Though the researchers only interviewed women, feeling “let down” or depressed after the wedding can affect newlyweds of either sex. The researchers wanted to know how common “post-wedding blues” were for these women, and how women who did experience this might differ from those who didn’t.

Overall, almost half of the women reported some feelings of post-wedding depression. Some just felt a little disappointed. But others felt more intense sadness and emptiness.  Meanwhile, other women were very happy, reporting no depression symptoms.

How Do “Blue Brides” Differ from Happy Ones?

Women who reported the strongest feelings of depression and unhappiness after their weddings seemed to be similar to each other in important ways, while women who were the happiest post-wedding were also similar in important ways. Here are some key differences.

In contrast, the happiest brides:

Though this study was quite small and might not apply to larger groups or to both genders, it’s interesting to see how the commonly repeated relationship advice to “Focus on the marriage, not the wedding” seemed to hold true.

However, it may be that the real difference between those two groups was their feelings about the wedding and relationship. While every relationship has its ups and downs, we also know that people who feel consistently unsure about their marriage are likely to have more personal problems, like depression, and more problems relating to their spouse. So while these brides’ blues may have something to do with having unrealistic expectations or focusing too much on the wedding day, they might also be caused by worries about the marriage.

Prepare for Your Own Marriage

If you’re considering marriage but want to make sure you are as prepared as you can be, one great idea is premarital preparation classes. Not only are these classes fun, useful, and empowering, in the state of Florida, they may entitle you to a discount on your marriage license! The SMART Couples project is offering Before You Tie the Knot, a FREE, research-backed premarital preparation class taught by trained instructors, in 5 Florida counties. Sign up today!