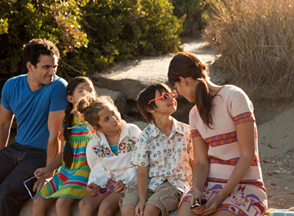 Are you part of a stepfamily, or about to become part of one? If so, you may have heard many statements or stereotypes about this type of family, some of which may have made you feel unsure, confused, or disheartened. Below, we debunk some myths about stepfamilies and replace them with modern realities.

Myth: Being part of a stepfamily is unusual, embarrassing, or “not the norm.”

Reality: Forty percent of new marriages today are remarriages, and more than 40% of Americans have at least one step-relative. Many unmarried cohabitors also bring children into the relationship, creating informal step-relationships. Being a part of a stepfamily is far from uncommon.

Myth: As a couple, we always need to put the children first.

Reality: Your stepfamily can’t succeed without two adults who love, care, and respect each other. There will be many times when it is crucial to prioritize the couple relationship.

Myth: We should start feeling like “one happy family” within a few months, or at least a year.

Reality: Research actually shows that it is completely normal for a stepfamily to take several years (even up to 10) to truly establish trust and bonds. This is even more true when children involved are older (especially between the ages of 9-15). This doesn’t mean you are doing something wrong. Time may be the best remedy for many issues.

Reality: Loving someone does not mean we automatically adore every other person they are related to. (Otherwise, why would we have in-law jokes?) It is normal not to feel close to your partner’s children—certainly at first, maybe for some time, or even (especially in the case of adult stepchildren) ever. Cooperation, civility, and respect will go a long way in the meantime.

Myth: Now that we have our own family, the “exes” are less important.

Reality: Barring abuse, a child’s biological parents should be an important part of their lives, and all involved adults should work hard to make sure those relationships are protected. A new marriage also will not make the past marriage or unresolved feelings about the ex “disappear.”

Myth: A new stepparent needs to immediately establish authority with a stepchild.

Reality: According to experts, it’s often best for birth parents to take the lead on discipline and child guidance, especially at first. Older children and teens may be quite resentful of a new adult trying to “boss them around.” Instead, it may be better for the new stepparent to behave more like an adult friend, mentor, or more distant “relative.”

Myth: All relationships in a stepfamily should be treated as equal.

Reality: It’s not productive or realistic to pretend that steprelationships are identical to relationships between birth relatives. A child’s time with his or her birth parent should be protected in recognition of that special bond. Similarly, allow the children to decide what to call a new stepparent rather than forcing the “mom” or “dad” title.

Myth: If stepchildren don’t act grateful to their stepparents, there’s something wrong.

Reality: Children and teens often appear ungrateful to parents, regardless of relationship! Teens may be particularly likely to seem ungracious and unappreciative. This is really quite typical.

Reality: If kids are involved, custody can definitely change—legally or due to the child’s preference. About 30% of children of divorced parents decide to switch households and move in with the other parent at some point. While this can be upsetting, it’s important to know that it isn’t atypical.

Myth: A stepfamily isn’t really that different from a first marriage family.

Reality: Stepfamilies are complicated! There are many new roles and relationships. Children have to adjust to new siblings, new grandparents, and a whole new set of family issues. Holidays are different and homes are new. Rules, customs, and styles of relationship may not be the same as those experienced in the first marriage. Step relationships also have a very different “beginning story,” and it does not make sense to deny this.

Myth: A stepfamily can never measure up to a birth family.

Subsequent marriages do have a higher divorce rate than first marriages, so it’s very important to keep an eye on the health of your relationship. But, as one stepchild interviewed reported, one advantage to stepfamily living is simply that there are “more people to love.”

Gamache, S. (1994). New perspectives on stepfamilies: Step is not a 4-letter word. Retrieved from https://www.stepfamilies.info/

Partridge, D. (n.d.) Myths of the meadow. Retrieved from http://www.smartstepfamilies.com/view/586

Swanson, S. D. (2009). The myth of stepfamilies: What every therapist should know. Retrieved from http://stepfamilycenter.com/

Return to Topic: Building Your Stepfamily